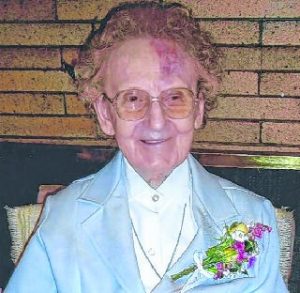 Sister Flavia Dampf, our former pastoral associate, was called home to God’s loving embrace on Saturday, October 24, 2020, at the age of 96 following years of dedicated service to the Lord. She passed away at the Clarence Residence of the Sisters of St. Joseph, where she has resided since October 24, 2011.

In June 2019 Sister Flavia celebrated her Seventy-Fifth Anniversary Jubilee as a Sister of Social Service. Having worked in various capacities in our parish for more than 30 years, Sr. Flavia is remembered with affection by many parishioners and former parishioners. She is probably best known for her food pantry ministry and close association with the Western New York indigenous community, and her attention to the children of the parish. Sister Flavia also introduced the Advent “Giving Tree,” which has become a parish tradition.

A Mass of Christian Burial and celebration of her life took place on October 28 at Blessed Sacrament Church on Delaware Avenue in Buffalo. Memorials may be made to the Cattauraugus Early Childhood Learning Center, c/o the Seneca Nation President’s Office, 90 Ohlyoh Way, P.O. Box 23, Salamanca, NY 14799.